For months before we left, I anticipated May 9th with both hesitation and excitement. Backpacking for two months through Southeast Asia is a serious commitment…at least it was to me. Leading up to our trip I heard a lot of doubtful remarks from people: “It’s going to be sooo hot and uncomfortable.” “You’re going to get sick from the food.” “It’s going to cost way more than you think…” It’s easy to let those opinions start sinking into your own head.

But now that we’re home from our two-month adventure, I can say with satisfaction that we proved those people wrong.

Our crew: me, my husband Patrick, my brother Andrew and his wife Beth. The four amigos. While in Asia, we traveled to four different countries and spent about two weeks in each.

Our first stop was the Philippines. From Salt Lake, we flew to Manila and took a 10-hour night bus to Banaue—a small village in northern Philippines.

After my miserable experience in Peru with the night buses, I’d promised myself I wouldn’t take one again. Little did I know that night buses would become a regular treat during our two months in Asia.

From Banaue we hiked about an hour to Batad, which is a gorgeous valley of rice terraces surrounded by steep mountains. The view from our hotel deck “blew my socks off,” as Papa D. would say…

We spent the next few days exploring Batad. When I say exploring, I mean getting lost from the trails and teetering our way along the narrow pathways between the terraces. Andrew was a trooper with his recently broken femur. He hobbled behind us with his cane “suga” and handled it like a champ.

Highlights of Batad: hiking to a waterfall, getting $6 massages, (is it weird that we were all stripped naked in a room together? Andrew, don’t look…) enjoying the views, trying new food and meeting the most humble and hardworking people we’ve ever met.

After we’d had our fill of Batad, we took a Jeepni back to Banaue. Pat and I rode on the top, which got a little sketchy trying to hang on while the maniac driver sped around curvy corners.

Turns out shoving 25 Asians in and on top of an old jeepni isn’t the greatest idea. When the tire popped, the Asians shot out of that thing like rocket ships. I truly don’t know how they got out of there so fast…

Our next stop was El Nido, which is a cute little beach town that has blown up with tourists in the past few years. To escape the crowds we rented a private boat to take us around the islands for a three-day, two-night trip. We quickly learned that camping in the Philippines is not for the faint of heart. It means hot, sandy and uncomfortable nights with man-eating rats scurrying around your tent and malaria-filled mosquitos swarming your head. But heck, we loved every second of it. 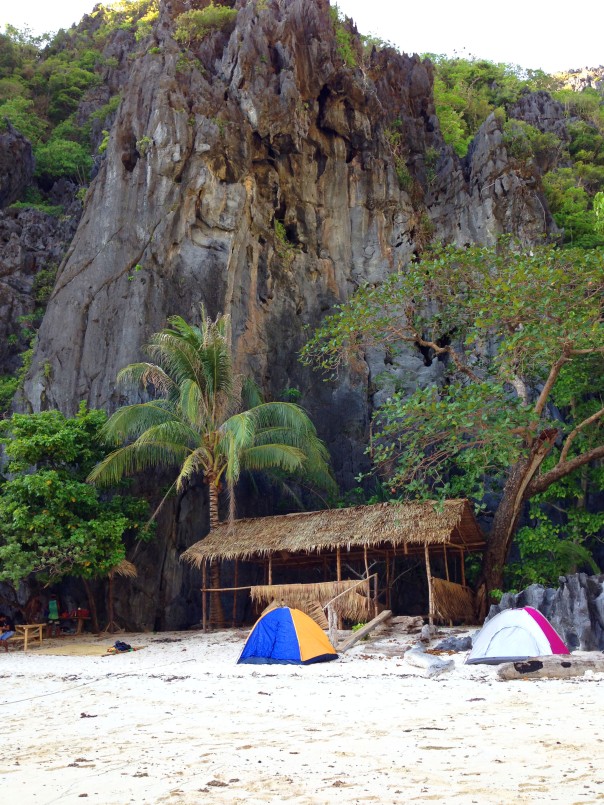 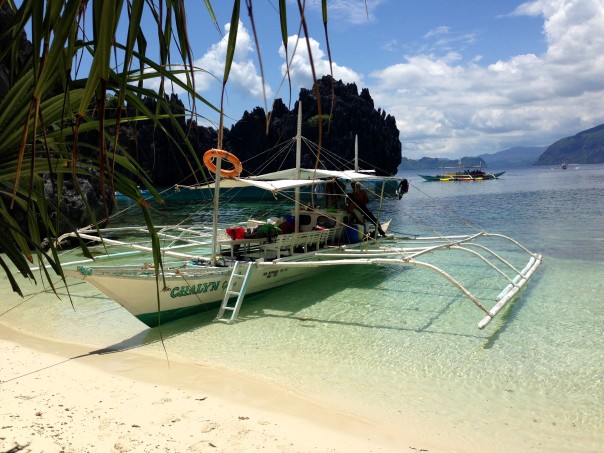 Our crew consisted of three guys—Marc, Jonathan and Cheeto—who looked like they were 14 years old. Turns out those boys know how to throw a mean beach party. They took us to some of the best snorkeling spots I’ve ever seen…crystal blue water with incredible wild life and crazy rock formations to swim through.

(We swam through that hole and popped up on the other side into a gorgeous, completely secluded lagoon that had amazing fish and underwater tunnels to swim through…)

They cooked us FEASTS of fresh fish, fried pork, fruits and exotic vegetables—who woulda thought Cheeto would be such a good cook? At night we’d set up camp on a deserted island and watch the sun set below the horizon.

It was an incredible few days, but by the end of day three, we were definitely ready for a shower and some pants. Wait what? ***Note to self: never wear a fanny pack with only a swimsuit bottom.

From El Nido, we took another night bus to Puerto Princessa to catch a plane to Cebu. The night bus got to PP around 3 a.m.—the airport didn’t open until 5. Hello asphalt, you are a way comfy bed. Not. I actually fell asleep for awhile but was woken up by a stray dog licking my foot. I’d put some anti-itch cream on a mosquito bite and I guess it was a tempting snack for that mangy little pup.

From Cebu we headed to a charming little town called Moal Boal. That’s were we found the 40 cent mango shakes that we got twice a day every day while we were there…

While in Moal Boal we snorkeled, went canyoneering and swam with whale sharks. Unfortunately we couldn’t bring our camera for the canyoneering so I have no pics to prove it, but it was definitely a highlight for all of us. We got to jump off a 40-foot waterfall into a natural pool, which was a first for me.

Swimming with the whale sharks was both terrifying and exhilarating. Those things are HUGE. One little flap of their tail in your face and your mom would be planning your funeral. Just ask Beth…she had a one-on-one battle with one of them when it tried to eat her. 😉

Looking back, the Philippines is a tippity-top contender for our favorite country in Southeast Asia. If you ever travel to Southeast Asia, you HAVE to put it on your must-visit list…

3 thoughts on “Southeast Asia: The Philippines”